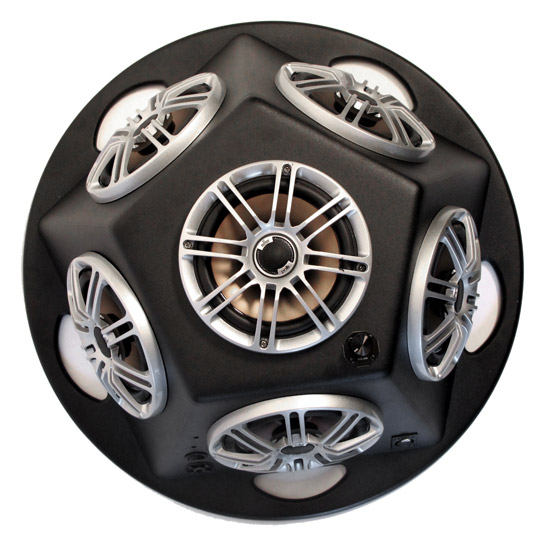 Hemispheres are unique, versatile loudspeakers that will change the way you think about amplified sound in live performances, sound installations, and non-traditional sonic/art scenarios.

Amplifed sound usually has a very different character from unamplified sound because of the way it interacts with its environment. Unamplified sound radiates out from its source in all directions, interacting with the walls, floor, ceiling, etc., while most loudspeakers project sound in one direction only. Typical “stereo” or “surround sound” systems have a “sweet spot” where they sound best, and the spatial illusion they create is destroyed if the listener is not properly positioned.

Hemispherical speakers are entirely different. They produce “localized” sound that emanates from the speaker’s position and interacts with a room’s natural acoustics. The speakers have no front or back, and no sweet spot for listening. This allows electronically-produced sound to take on the characteristic intimacy of unamplified sound, changing the experience of both performer and audience, and improving the quality of hybrid performances that mix acoustic and electronic instruments.

Since we began making them in 2001, Hemisphere speakers have shown up in some of the most unique and interesting situations on earth.  They have been used by electronic musicians looking for a more organic voice for their music, acoustic musicians seeking amplification without the sound of an amp, and sound artists who want their sounds to feel naturally localized in space.  Isobel’s Hemisphere speakers have been the speaker of choice for the growing community of “Laptop Orchestras”, and have been used by the original group, the Princeton Laptop Orchestra, since its inception.  A sixteen-Hemisphere array has been installed continuously at Brooklyn’s Issue Project Room since 2005, and the Floating Point festival, encouraging artists to imagine work for multi-channel Hemisphere arrays, has been in residence there since 2006.  We hope that you’ll also join the growing family of Hemisphere users, and add your story to the collective history.

Learn more about the current models of Hemisphere >